A Scottish energy company has launched a lawsuit aimed at allowing it to seize the planes of state-owned Air India, in an escalating tax dispute with Narendra Modi’s government.

Cairn Energy is suing Air India in the US to enforce a $1.2bn plus interest award — it is now worth more than $1.7bn — in one of a number of disputes between western companies and New Delhi.

The lawsuit, filed in the southern district of New York on Friday, seeks to establish that Air India is “the alter ego of the Republic of India and therefore jointly and severally liable for the debts and obligations of India itself”.

It is a legal process that could lead to Cairn Energy trying to seize aircraft and other assets as part of a long-running tax dispute, although talks to settle the case are continuing.

The Edinburgh company has identified $70bn of Indian-owned assets globally that could potentially be pursued, including in London.

If the New York case proves that Air India assets are exposed in the dispute, Cairn Energy believes it should set a precedent for other state-owned assets. New York’s legal system is the focus of the company’s efforts because of its record in dealing with international disputes of this kind.

UK prime minister Boris Johnson is under pressure from the Labour opposition party to stand up for Cairn Energy and other companies in dispute with India.

Labour claims Johnson is staying quiet because he is desperate to reach a trade deal with Modi. A Conservative official said he did not think Johnson raised the Cairn Energy case in a video conference with Modi this month.

Johnson agreed in his video call with Modi an “enhanced trade partnership” — both sides say they are seeking a full free trade agreement that would remove barriers to trade and investment.

But some western companies argue that Modi’s government is failing to honour existing commercial agreements. Vodafone, one of Britain’s largest companies, has become embroiled in a complex dispute with India’s tax authorities, which demanded €3bn in back payments. An international arbitration court ruled in Vodafone’s favour, but New Delhi appealed against the decision.

Devas, a satellite company based in India and the US, has also been dragged into a legal dispute with Indian authorities.

“We cannot be in a position where Boris Johnson is failing to stand up for the interests of British firms just in the hope it may smooth the path to a future trade deal with India,” said Emily Thornberry, Labour’s trade spokeswoman.

The UK government said it hoped “a resolution is found soon” between Cairn Energy and the Indian government but that it did “not comment on legal proceedings it is not a party to”. It was committed to helping UK companies looking to invest in India. 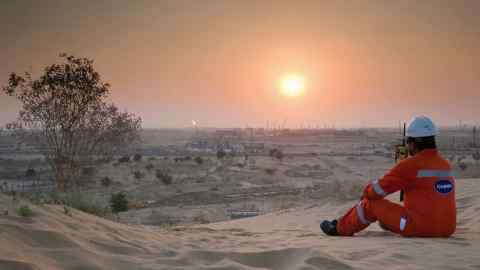 An international tribunal in December ordered India to pay Cairn $1.2bn in connection with a dispute over retrospective taxes New Delhi sought to levy on the company. Modi’s government has challenged the process.

India’s finance ministry did not respond to a request for comment, though local media quoted an anonymous official as saying that the government would take all steps to defend itself.

Under a law passed in 2012, India retroactively demanded $1.4bn in tax payments from Cairn Energy related to the UK group’s flotation of its Indian subsidiary on the Bombay Stock Exchange in 2007.

An arbitration tribunal found that India had violated its obligations under the UK-India Bilateral Investment Treaty in 2014 when tax officials seized Cairn Energy’s residual 10 per cent stake in the subsidiary, which it sold to Vedanta.

Speaking at an event hosted by the Financial Times and Indian Express, she said: “The international arbitrations questioning India’s sovereign right to tax is a matter of concern, and to that limited extent, we are worried that it sets a wrong precedent.”

Cairn Energy said it was “taking the necessary legal steps to protect shareholders’ interests in the absence of a resolution to the arbitral award”.