The Bank of Canada signaled about possibility earlier than expected and decided to adjust the program to a target of $3 billion weekly net purchases of Government of Canada bonds, which means a 25% cut.

Despite the spread of COVID-19, the BoC positively assessed economic prospects and bet the current vaccination pace will help neutralize negative effects of the pandemic’s third wave. (As of Apr. 23, 24.21% of the population received at least one dose and only 2.37% received two doses.)

Following the Bank of Canada decision, strengthened against major currencies.

This decision affected the bond market first, causing a slight increase in the yield to 1.559%. This growth was short-lived, and the yield stabilized over the following days at 1.520%.

The bond purchase program cutback implies a gradual rise in yields. In the future, it may lead to the between the 10-year Canadian and U.S. bonds above zero. This will put pressure on the USD/CAD pair, provided the U.S. Treasury yield does not rise. 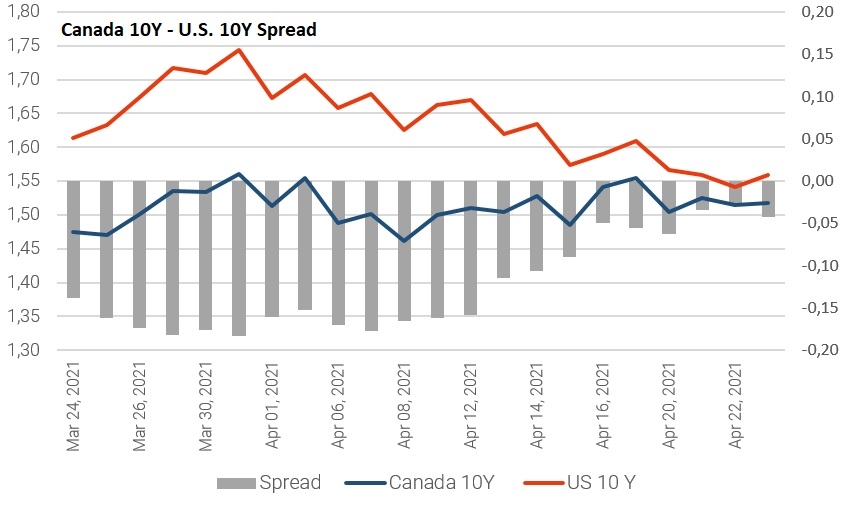 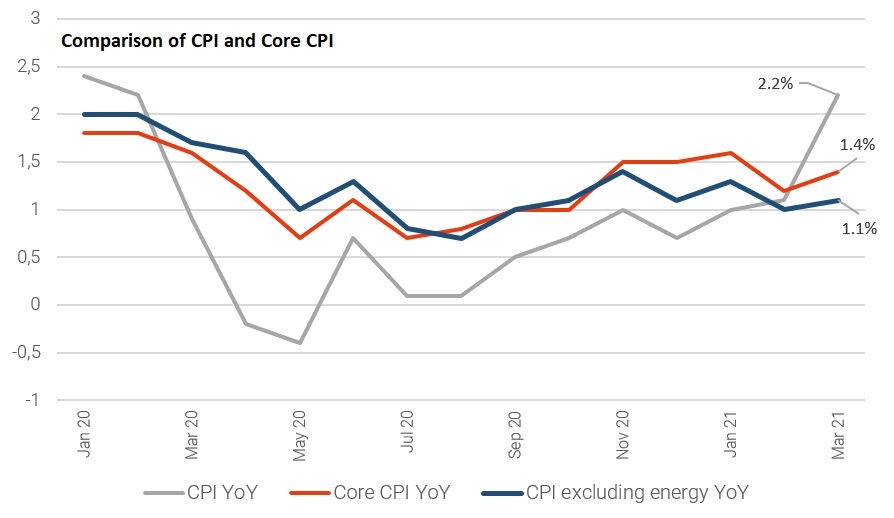 Comparison of CPI and Core CPI

Consumer price growth increased within a context of rising consumer confidence and improving employment conditions as COVID-19 restrictions eased in many regions of the country. rose to 634.8K in March last week.

As you can see from the graph, CPI excluding energy grew less significantly, which indicates a high share of the prices growth in the March inflation jump. It is an external risk that is difficult to control.

It will be heavy for oil prices to rise above $70 per barrel in the current situation. Global oil demand growth is unlikely to be a sufficient driver, given that before the pandemic, the Brent was in the same range. But there are plenty of drop oil risks, for example, the possible lifting of sanctions against Iran.

The average price in February-May 2020 was approximately $41, down from $65 in January. This decline in oil prices led to the decline in inflation in the 0.7-1.0% range in the same period. Based on this, Brent’s decrease to $50 will lead to a decrease in CPI by 0.5-0.7% from current levels. It will reduce inflation expectations and may lead to an economic forecast change.

At the same time, some indicators in the inflation index structure show concerns about the growth of retail sales. In March, “commodity prices” rose 0.8%, while “transportation prices” rose 1.2%. It suggests the increase in the “goods prices” includes an increase in transportation costs. This fact gives grounds for a more pessimistic view of retail sales growth rates.

February retail sales data is scheduled to be released on Apr. 28. According to the consensus forecast, rose 4.0% in February after falling 1.1% in January. 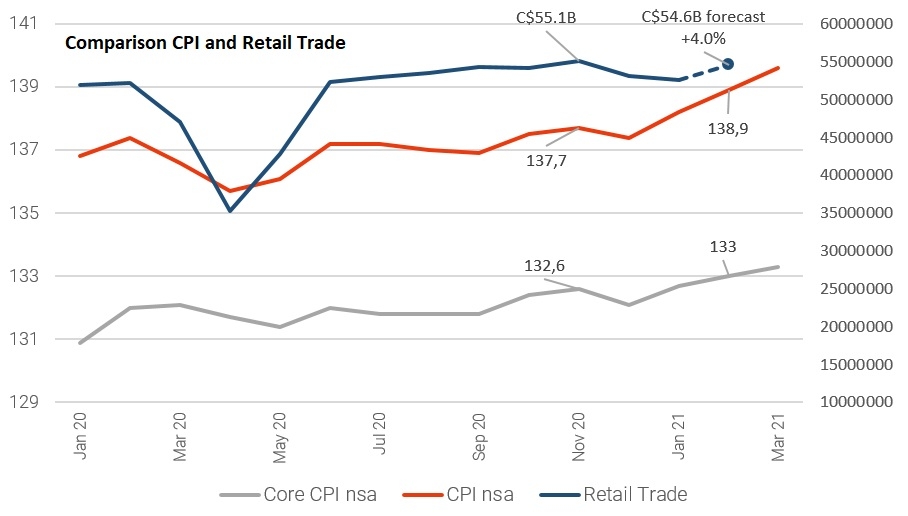 Comparison of CPI and Retail Trade

Even if retail sales grow 4.0% in February, it will still be below the November value. It suggests that retail sales are lagging at the rate of inflation. To catch up with inflation and confirm consumer activity growth, retail sales should rise by at least 5.0% in February and continue to rise in March. If it does not happen, expectations of Canadian economic recovery will decrease. In this case, the Canadian dollar will weaken.

Thus, a decrease in the pace of bond purchases will support yield growth and, as a consequence, Canadian dollar growth. On the other hand, there are still many risks of economic slowdowns, such as, a possible reduction in the rate of recruitment due to an increase COVID-19 cases; potential decline in retail sales; possible decline in oil prices.

If retail sales data on Wednesday are worse than forecasted, it will be the first wake-up call. ADP Nonfarm Employment change data in mid-May will show how the business responded to the pandemic third wave.

The focus also remains on the negotiations between the United States and Iran and the prospects for lifting restrictions on the oil trade. If retail sales rise over 4.0%, then the Canadian dollar is likely to rise against the , , and .