Shares of Confluent (NASDAQ:CFLT) surged 42.7% in August, according to data from S&P Global Market Intelligence. The stock gained ground after the open-source data analytics company published second-quarter results early in the month, and it continued to climb in subsequent trading.

Confluent published Q2 results on Aug. 5, posting sales and earnings results that topped the market’s expectations. The company posted a non-GAAP (adjusted) per share loss of $0.31 on revenue of $88.34 million, while the average analyst estimate had called for a per-share loss of $0.39 on sales $76.86 million. Confluent provides expanded capabilities and cross-platform functionality built on the Apache Kafka open source technology used for data sorting and analytics. Selling what essentially amounts to a more advanced, more versatile version of base software that’s available for free might sound like a tall order, but the company’s Q2 results suggest that its services are seeing strong uptake in the enterprise sector.

Sales were up 64% year over year in the second quarter, and revenue for the company’s cloud segment tripled to come in at $20 million. The company ended the June quarter with 617 customers with annual recurring revenue contract values of $100,000 or more, an increase of 51% year over year.

Confluent stock has continued to make gains early in September’s trading. The company’s share price is up roughly 5.5% in the month so far. 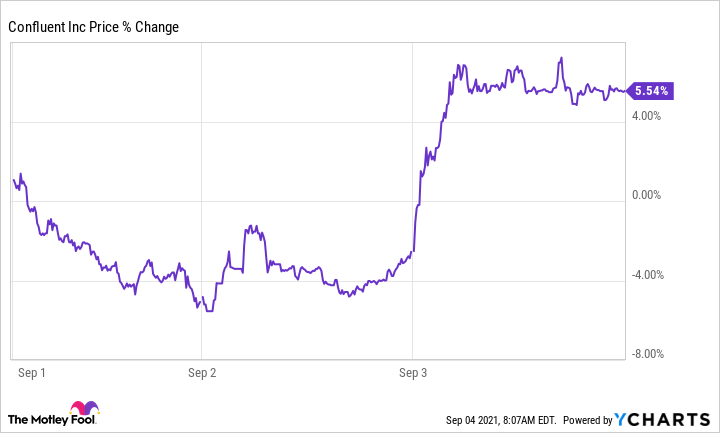 For the full year, Confluent is guiding for its adjusted loss per share to be between $1.05 and $1.07 on sales between $347 million and $351 million. Confluent has a market capitalization of roughly $15.4 billion and is valued at roughly 44 times the company’s midpoint sales target for the current fiscal year.

Here’s Why I Bought Chewy Stock | The Motley Fool