Sunrun (NASDAQ:RUN) has been one of the hottest solar energy stocks of the past few years, gaining 262% for investors since the start of 2019. It’s done so well by acquiring and out-growing the competition in rooftop solar.

If you look at the company’s earnings reports, it looks like the company is generating billions of dollars in value for shareholders — but there are some risks for the company that investors should be aware of. Two, in particular, could haunt the company if inflation fears continue to roil the market.

What is an earning asset?

Sunrun uses a calculation called earning assets to estimate the value its solar installations are creating over time. Earning assets is essentially the same as the old retained value calculation and is described by Sunrun as the “present value of cash flows from customers over time.” Management reports this number each quarter so we can see how it changes over time.

Since Sunrun finances its solar projects long-term, it makes sense to try to gauge the value generated each quarter. But the devil is in the details for how you calculate earning assets.

For example, Sunrun reports “gross earning assets” for the contracted period and the renewal period of solar contracts. The contracted period is normally the 20 to 25 years over which customers agree to pay for their solar installations through a lease or power purchase agreement for the electricity produced. The renewal period is the time from year 20 or 25 to year 30.

In reality, we can reasonably expect customers under contract to continue paying their bills as planned, but we have no evidence that customers will renew contracts on 20-year-old equipment. And given the price escalation built into contracts and the falling price of solar installations, renewal of the contract is probably an unwise financial move for most of Sunrun’s customers. So, let’s be conservative and assume that the renewal value investors should use is $0.

Assuming contract renewal on two-decade-old solar equipment and using extremely low interest rates in value calculations are huge risks to Sunrun’s value, and how quickly billions of dollars in value can evaporate when those conditions change.

Sunrun’s value isn’t what it seems

Management reported $4.23 billion in net earning assets at the end of the first quarter of 2021. But that number may be much higher than the real value created long-term.

Below, I’ve calculated net earning assets excluding the renewal period and Sunrun’s cash, which isn’t earning anything other than a very low interest rate in the bank. I’ve also added higher discount rates, which you can see rapidly reduce the value of earning assets.

You can see that simply pulling out the renewal value and raising the discount rate to 7% reduces the value creation to negative. That should be alarming to investors.

The interest rate used in discounting cash flows is important, and Sunrun lowered the rate it’s using to discount cash flows in 2020 as interest rates were falling overall and Sunrun’s borrowing costs were declining. But over the last few months, the interest rate of Treasury bonds has been rising. Since hitting lows last fall, rates are up a full percentage point. 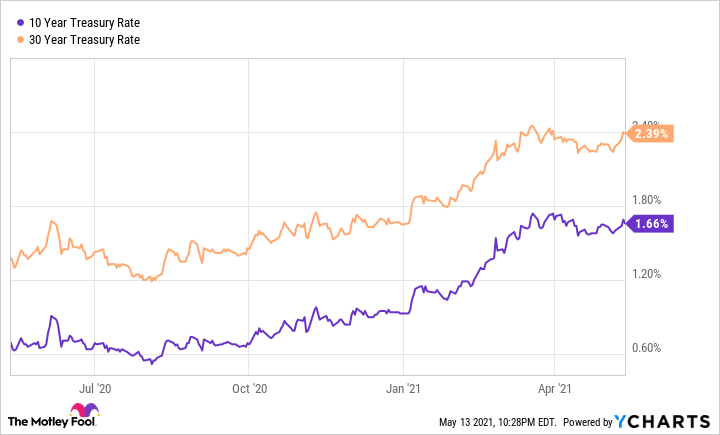 For perspective, Sunrun’s securitized loans have a weighted average interest rate of 3.9%. This is the lowest risk debt in the portfolio, so it should be discounted at the lowest rate. But management is discounting all cash flows at just 5%, giving very little premium for equity holders, who are taking far more risk than securitized debt holders. When you consider the risk shareholders are taking, a discount rate of 6%, 7%, or even higher may be appropriate.

No matter how you look at the discount rate of cash flows, if rates rise because inflation picks up and the Federal Reserve feels it needs to react, Sunrun could feel the pain. And it looks like rates are still trending higher.

Be aware of Sunrun’s risks

It’s not as if Sunrun’s value on the balance sheet would evaporate, so I’m not arguing the company is in danger of collapse. The debt highlighted above has locked in some value and protected Sunrun from rising rates short-term. But rising rates have to be a concern for investors, and I think giving no value to renewals is a conservative assumption worth making given we don’t know if customers will choose to renew solar contracts with existing equipment.

Sunrun’s $8.1 billion market cap seems extremely optimistic given the assumptions going into the company’s earning assets calculation. And that’s why this is a solar energy stock I would stay away from as interest rates rise.