Shares of coal producer Peabody Energy (NYSE:BTU) fell as much as 23.1% in trading on Tuesday after some of the euphoria in the stock yesterday wore off. Shares of the stock were still down 20.4% at 3:30 p.m. EDT but were up 6.6% for the week.

The real story today is about giving back yesterday’s gains. Shares of the coal energy stock jumped yesterday because warmer than normal weather is expected in the U.S., which caused a jump in natural gas prices on hope that supply would exceed demand. Logically, if demand for natural gas is up it seems like the demand for coal should be up as well.

Some of the short-term story about high demand may be right, but there’s a big flaw in the bullish case for Peabody Energy. First, the spike in demand could be short-lived because the weather could turn cold later in the summer. More importantly, coal power plants across the country have been shut down for good, and there’s going to be less demand for coal in the future. The chart below shows how quickly coal is declining as an energy source in the U.S. 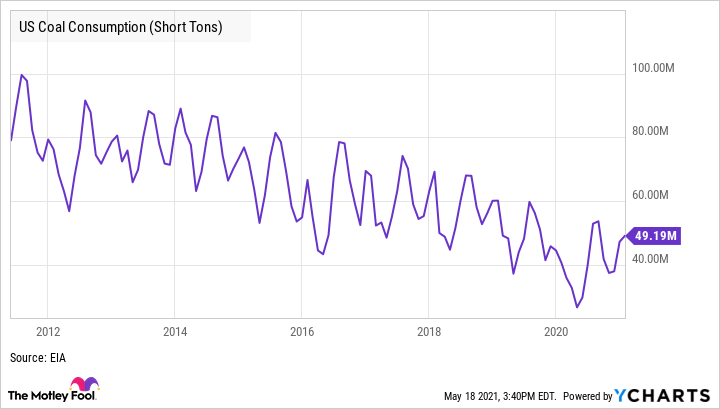 US Coal Consumption data by YCharts

It was speculation that sent Peabody Energy higher yesterday and when the speculative buyers disappeared the stock gains were gone as well. I wouldn’t read too much into this week’s moves but would pay attention to coal’s trends long-term. The source of energy is in sharp decline and companies like Peabody Energy will have a very hard time surviving in the long run.