Euro 2020 and the Copa America are over and the summer transfer window is open, leaving Europe’s biggest clubs clear to make a splash in the market. Check out the latest gossip below, and see all official deals here.

Vinicius, 21, moved to Madrid in 2018 for €46m from Flamengo but only contributed six goals in 49 games last season. The Brazilian is unhappy about the prospect of being moved on, but Madrid need to raise funds to sign Mbappe for over €150m.

Manchester United have been offered Vinicius on an initial loan, with the option of a permanent deal next year, and have tracked the player in the past. However, they are already set to sign winger Jadon Sancho from Borussia Dortmund for €85m and are closing on a €50m move for Real Madrid defender Raphael Varane, so may not have much more money to spend.

The report says that Real want at least €75m for Vinicius, who played for Brazil at the Copa America.

13.21 BST: Barcelona manager Ronald Koeman has given an interview to Barcelona TV and said of Lionel Messi: “He is vitally important. For what he brings to the team, he’s the captain and an example. His goal scoring has been brilliant despite a difficult start. He has shown time and again he is the best in the world. I know how much he wanted to win the Copa América and he has done it at last. Messi is the prime candidate for the Ballon d’Or after a great season and for me he is the favourite.”

On Aguero, he said: “He is an important signing as we have to improve in front of goal. ‘Kun’ is an experienced player and very dangerous in the box. He has to be right physically and we want him to be at his best for us.”

Regarding Depay, he added: “It’s important that I know him well; he knows how I work and he is a player with a lot of character — he is strong, quick, he brings us a lot. He can play anywhere up front and he is coming into the prime of his career. He improved a lot at Lyon and he gained experience as captain.”

12.40 BST: AC Milan have announced the permanent signing of defender Fode Ballo-Toure from AS Monaco.

Ballo-Toure, 24, moved to Monaco from Lille in 2019 and made his international debut for Senegal in March.

Negotiations between Barca and Atletico regarding a swap deal that would see Antoine Griezmann return to the Wanda Metropolitano and Saul move to Camp Nou are not progressing. Barca are looking at alternatives and Sanchez could be a good option to strengthen the midfield line.

Sanches, 23, helped Lille win the Ligue 1 title this season and was a starter in Portugal’s Euro 2020 squad. The midfielder flopped at Bayern after an €80m move in 2016 but has since reignited his career.

Barca would want to include an option to sign him permanently in the deal which would help the Spanish club considering their current financial situation.

11.45 BST: Brahim Diaz says he is very happy to remain at AC Milan on loan from Real Madrid.

“I’m very happy, I’m thrilled,” Brahim told Sky Italia upon arriving to Milan’s Linate airport on Saturday. Real Madrid reached an agreement with AC Milan for Brahimto continue to play at the Rossoneri club on loan for two further seasons. The deal has yet to be made official but AC Milan were keen for the attacking midfielder to stay at the club after scoring four goals and setting up four more in 27 league appearances for the Rossoneri last season while on loan.

The Serie A champions are looking to strengthen their backline after the departure of full-back Achraf Hakimi to Paris Saint-Germain earlier this month in a deal that could be worth €70m. Bellerin, who is considered the ideal replacement for Hakimi, has a contract with Arsenal until June 2023 but is keen for a new challenge after a decade with the London club.

“Hector Bellerin is a player that we are following, but I can’t say anymore as he is not our player, ” Marotta told Sky Italia.

On the possible return of Telles, who played on loan at Inter in the 2015-16 campaign from Galatasaray, he added: “I can’t exclude anything, in football anything can happen. but right now we are focusing on evaluating all the opportunities that are out there without being in a hurry to complete this or that operation.”

Telles could leave Old Trafford after just one season at United. The Brazil left-back joined the Red Devils from FC Porto in October on a four-year contract but made just nine league appearances for the side.

10.50 BST: Wolves have a new striker, same as their old striker. Great to see you back Raul Jimenez.

Raul Jimenez starts in Wolverhampton’s preseason friendly vs. Crewe Alexandra, his first match since suffering a skull fracture in November 2020.

Pjanic, 31, moved to Camp Nou in 2020 for €60m, with Arthur heading the other way for €72m. But as Barca’s financial situation has worsened, the club view the Bosnia & Herzegovina international as dispensable and are looking to move him on.

Juventus have expressed a desire to bring him back, but clearly hold all the cards when it comes to the financial aspect of any deal.

09.45 BST: Liverpool goalkeeper Alisson is set to sign a new contract, according to Fabrizio Romano.

Lewandowski, 32, is a cheaper option that Borussia Dortmund’s Erling Haaland, who Chelsea have already tried to land for £100m plus Tammy Abraham.

The Poland international has a contract until 2023 and Bayern won’t want to let him go, but may consider a big offer as he is unlikely to sign an extension.

Lyon are believed to be willing to transfer Aouar in a cut-price deal worth around €25m.

Arsenal have a long-standing interest in the midfielder but need to offload players first before entering the running. Paris Saint-Germain, Manchester United, Liverpool and an unnamed Spanish club have also been linked with a move.

However, Spurs have contacted Lyon with a proposal which includes the chance to re-sign Ndombele, who joined Spurs for a club-record €60m in July 2019.

Sources have told ESPN there has been no formal response from Lyon as yet, although they are looking to raise cash after missing out on Champions League qualification and having been hit financially like all clubs by COVID-19.

– The Telegraph has suggested that Tottenham Hotspur striker Harry Kane could skip training to force through a move to Manchester City. However, The Athletic is reporting that a move to Chelsea could actually be more likely for the England international. It is unknown how the 27-year-old would feel about joining Spurs’ rivals, but the report says that the package being offered by the Blues is the most appealing for Spurs’ CEO Daniel Levy. Levy feels that a deal with Chelsea could be more realistic due to the potential for a player-plus-cash deal including somebody like Tammy Abraham, who offers what Spurs would need positionally if Kane was to depart.

– AS Roma and Internazionale are both showing interest in Manchester United left-back Alex Telles, as has been reported by Calciomercato. Jose Mourinho’s team is looking for somebody to replace the injured Leonardo Spinazzola, while Inter’s attempts to sign the Brazilian could rest on Ivan Perisic‘s future, with it possible that the Croatian winger will leave this summer.

– Lyon are working on a loan deal for Barcelona centre-back Samuel Umtiti, reports Diario Sport. The Ligue 1 outfit wouldn’t be able to afford a permanent deal, so are hoping to bring the Frenchman back to his former club while paying 50% of his wages. It’s unknown whether Barcelona will accept this as they aim to fight financial troubles of their own.

– Tottenham are hoping to sign Atalanta goalkeeper Pierluigi Gollini, according to Calciomercato. It is suggested that managing director Fabio Paratici is keen to bring the 26-year-old in on a two-year loan deal with a right to make the move permanent afterwards. Inter and Atletico Madrid are also showing interest.

– Brighton & Hove Albion could look to sign Barcelona frontman Martin Braithwaite with the £50m brought in for Ben White, who has been linked with a move to Arsenal, reports Diario Sport. However, it is suggested that the 30-year-old Braithwaite, who represented Denmark at Euro 2020, would rather join West Ham United or Wolverhampton Wanderers. Barcelona are looking to bring in €15m for him.

– Having spent last season with West Bromwich Albion, 21-year-old Conor Gallagher will be loaned out by Chelsea again this season, reports The Sun. It is reported that Crystal Palace and Newcastle United are the ones hoping to bring him in. The Blues are unwilling to let the midfielder leave permanently, though. 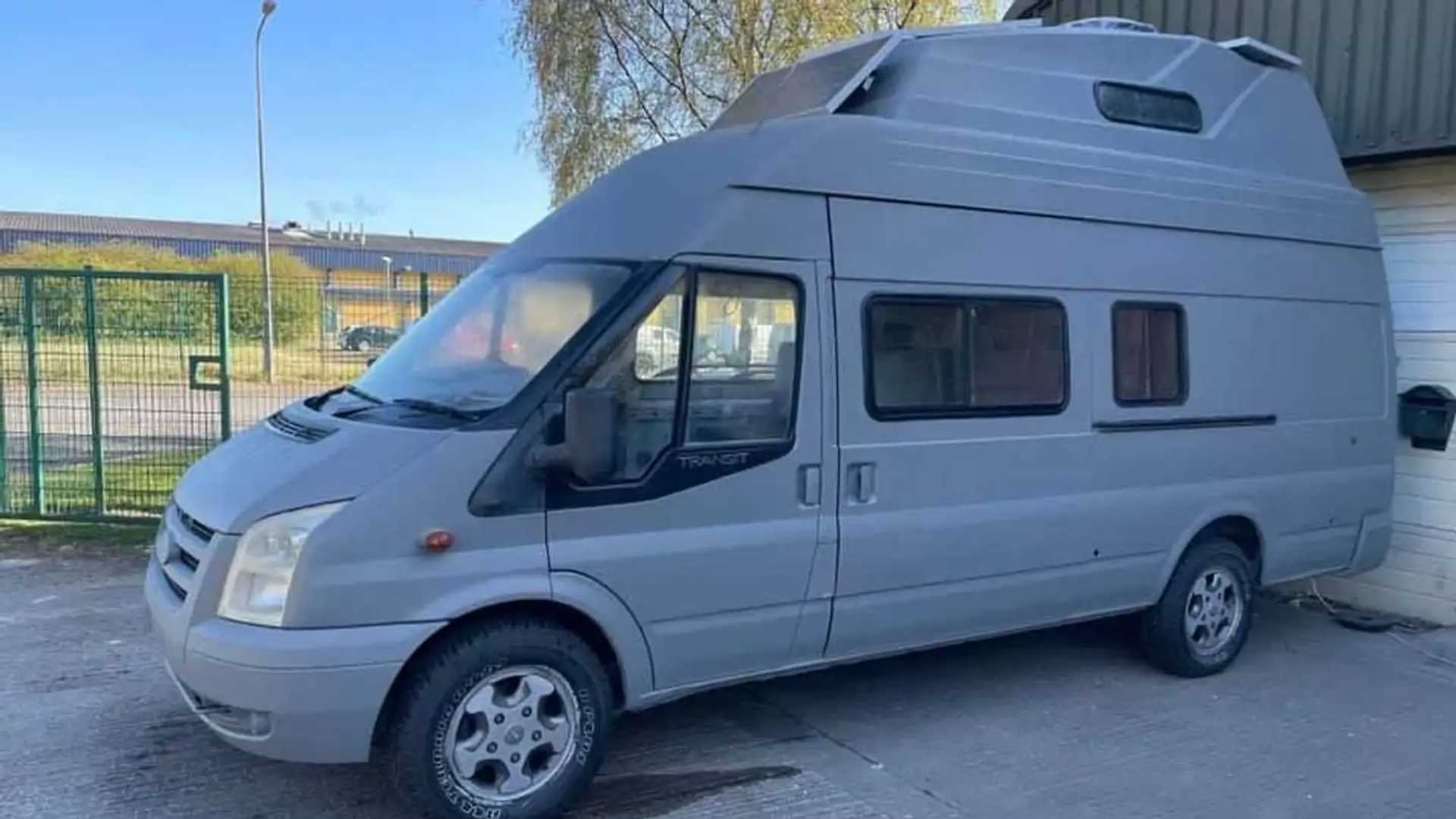 Could This Custom Ford Transit Camper From The UK Be Any Taller?
2 mins ago